A surprising diagnosis shakes up the story sending Cat Williford on a heroine’s journey.

The Ovarian Chronicles is a story of the resilience found in healing mind, body, and spirit. 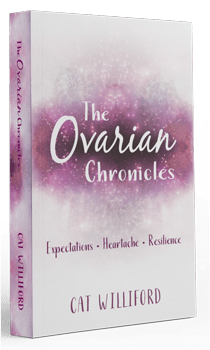 Covered from the waist down by a baby-blue paper sheet with feet up in stirrups, it is hard to feel in charge. So begins The Ovarian Chronicles, a memoir that holds the mirror up for women and the hard choices they often face between the competing longing of their bodies, their expectations, and their partner’s needs. In this raw, honest account, Cat Williford shares her rich story of how a potential cancer diagnosis helped strip off her protective masks and place her at a vulnerable crossroads.

Be In The Know!

Yes! Notify me when Cat’s book, The Ovarian Chronicles is available!

You will receive an email with a link to purchase the book as soon as it is available!

You will also receive instructions on how to access two bonus gifts after you get the book.

You will be sent a link to join a community call with me so you can get the most out of the book and meet other awesome women! Value: Priceless Networking Opportunity

Don’t just push through one more ache, pain, hot flash or headache!  Find out what your body is trying to tell you, before an annoyance becomes a problem. Value: $100 (read details below)

This powerful e-book and mp3 guided meditation combo utilizes both sides of your brain! You will discover:

The result? You enter a sacred partnership with your body, leading you to experience more love, health and happiness!

What people are saying about The Ovarian Chronicles:

Reading The Ovarian Chronicles felt like I was allowing myself to breathe. Sometimes it felt as if Cat was reading my mind, sometimes it read like deeply touching poetry, and sometimes the wisdom hit me right between the eyes. This is not a self-help book but a journey that feels like we are walking together through pain, grieving, hope, and miracles. All women should read and breathe in Cat’s story so we can support each other more fully through this adventure, with potholes and hills, called life.

Author, Wander Woman, The Discomfort Zone, and Outsmart Your Brain

Cat Williford in The Ovarian Chronicles evokes the soul, the magic, wisdom and resiliency of our collective feminine spirit. From the delivery of the news one would never want to hear from a gynecologist, to battling layers of grief and finally listening to her inner body’s knowing, Cat shares her story with honesty, humor and deep love and helps us awaken to the call of our own body’s wisdom. Through her heartfelt stories, this book will be a rally cry for women everywhere to listen to their innate wisdom and be courageous in their pursuit to do what’s right for them!

Author, Wake Up to the Joy of You and Unbinding the Heart

Every woman who has struggled with the joys and disappointments of our own bodies (and that’s ALL of us) will find points of identification with Cat Williford’s The Ovarian Chronicles. Cat brings humor, charm, and rawness to a uniquely female experience. From family, partners and fertility, to the falling in love we must all do with ourselves, Cat brilliantly shares her journey while offering a pathway for each of us to mend the big rifts inside of us. She bridges the gaps between commonsense, magic and reality as she invites us to take charge of our health, our bodies beautiful and our life.

After wiping the tears of emotion from my eyes, both tears of laughter and tears of grief, I can say unequivocally that this book shares the deep soul of being a woman, with the many challenges a woman experiences. Written in the incredibly straightforward “Texas” voice of Cat Williford, I would recommend this book to all women and to all men who want to understand women better.

When it comes to fertility, medical facts are just one part of the story. Cat shows us how to listen, hear and live into other sides of this multifaceted story. She shares her own narrative of challenging the science and searching for balance. Through her story Cat explores duty to self and the need for real relationship. She reveals how women can truly support each other. At the heart of this book is the importance of understanding and valuing the link between our emotions, hormones, mind and body. How emotions get locked into our bodies and impact our health and wellbeing, until we do the work to unlock them and set ourselves free. Cat’s remarkable and inspiring journey is of a powerfully self-aware writer who shows the way for other women to discover and accept who we truly are.

In The Ovarian Chronicles, author Cat Williford captures the essence of being a woman. From what we do for love to what we do when love unravels, from how we handle our fertility and scary words at a doctor’s office to our womanly grief, Cat shares a magic-filled and sacred blueprint for the profound journey back to joy. This book touched me deeply and connected me to my own rich, terrifying, and beautiful journey as a woman. You’ll love this book and want to give a copy to all your girlfriends.

Take responsibility for your health and your dreams. No one else will do it for you. 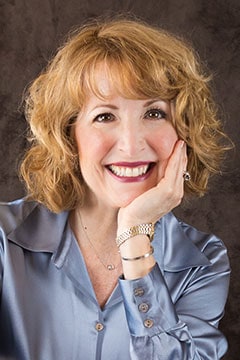 Cat Williford is a modern-day goddess helping women around the globe to unmask their deep feminine wisdom and authentic voice. A connecter of diverse worlds, she fuses her own hard-won body wisdom with the knowledge of her Texas surgeon father’s western medicine. The result is a holistic experience that nurtures vulnerability and strength. A master certified coach who received one of the first professional coaching credentials in the United States, Cat is also a keynote speaker and founder of The Modern Goddess series of workshops, ceremonies, and retreats. She has appeared coaching live on ABC’s talk radio, and The Los Angeles Times dubbed her, “serene … with corporate polish and carefree humor.”

Cat’s signature program, The Authenticity Advantage™, is a uniquely powerful system to unmask women’s stories, heartfelt vulnerabilities, and hardy resilience. Her vulnerability and willingness to tell it straight like a shot of tequila is part of her Texan charm. Cat’s book, The Ovarian Chronicles, details the story of how she lost sight of navigating her future as her body’s knowing became secondary to someone else’s desires and reality. Her vulnerable honesty gives women permission to get real, forgive, heal, and recover their own resilience.

Today, Cat lives on the beach of Ventura, CA where she hunts for nautilus shells, dances to 1970’s music in her living room, and delights in moonlight sparkles on the ocean. 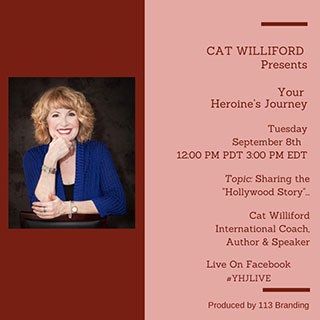 Learn more about The Ovarian Chronicles on Your Heroine’s Journey Live on Facebook hosted by Cat Williford:

Does all in Hollywood sparkle and shine? Host Cat Williford is no stranger to the truth of what happens in Hollywood. How did removing her Perfectionista Mask allow her to discover her true passion, leaving Hollywood behind? Find out on this episode of Your Heroine’s Journey Live show. https://bit.ly/YHJLIVESEPT15